First characterized 30 years ago, aromatic L-amino acid decarboxylase (AADC) deficiency is a rare, genetic disorder that affects the central nervous systems of young patients.[1,2] AADC deficiency is caused by defect in the dopa decarboxylase (DDC) gene, which leads to a reduction in the critical neurotransmitters dopamine, norepinephrine, epinephrine, and melatonin  in the brain.[3]

As a result, the functions and cellular communication controlled by these individual neurotransmitters can be affected. For example, patients with AADC deficiency experience varying symptom severity which includes developmental delay (sit, crawl, stand, walk), oculogyric crisis, and moving disorders (such as hypotonia). The additional symptoms associated with AADC deficiency are related to the poor production of the other neurotransmitters.[2]

Signs and symptoms usually appear in affected children before their first birthday. Patients often start to display severe developmental disabilities, and have difficulty gaining muscle strength and coordination. Vital motor function, including breathing, swallowing, and feeding, can all be affected. Patients generally require lifelong care, and those with severe symptoms rarely survive beyond 10 years of age.[2] Symptom severity is dependent on the phenotype of the disease; some patients survive into adulthood, and in these cases, may only need assistance in limited areas (e.g., mobility).[1,4] For patients with moderate symptoms, survival into adulthood is possible, but clearer information on the natural history of these patients is not yet available.[5]

The DDC gene creates an enzyme that is required for the production of the neurotransmitters dopamine, epinephrine, norepinephrine, serotonin, and melatonin. Therefore, when the enzyme is not present, the levels of all of these neurotransmitters are far lower than normal, interfering in several ways with intercellular communication. The abnormal neurotransmitter levels inhibit motor and muscle development, as described above.[2,5]

This genetic disorder is passed down through autosomal recessive heredity; meaning that only children receiving a mutated DDC gene from both parents can express symptoms.[2] Those receiving only one copy of a mutation will have normal DDC gene function but are carriers of the recessive, defective gene. Yet, over 80 variants of the DDC gene have been recorded, which probably explains the spectrum of symptoms seen in patients.[6]

AADC deficiency has been documented all over the world, but the highest prevalence is seen in the Asian population due to the founder effect.[9] Based on the case series, the average age when symptoms first appear is 2.7 months, but mean age at time of first diagnosis is age 3.5 years.[5]

The first sign of the disease is usually hypotonia (e.g., the neck muscles are too weak to hold the baby’s head up). Other neurological problems, including developmental delay (e.g., walking and talking), movement disorders (e.g., involuntary movements), and autonomic issues (e.g., excessive sweating, chronic nasal congestion, hypotension, uncontrolled heart rate, and ptosis), are common; patients may have one or more of these signs.[5] Other reported signs in AADC deficiency are frequent sleep disturbances, which are caused by the melatonin abnormalities, general lack of energy, and poor appetite. Chronic diarrhea was noted in a case series of 10 French children with the disorder.[10]

One movement disturbance that can be extremely concerning to caregivers of patients with AADC deficiency is a syndrome called oculogyric crisis, prolonged involuntary upward deviation of the eyes. Symptoms tend to worsen with fatigue and improve after the patient sleeps.[5]

Once suspected, a diagnosis is challenging: analysis of metabolites in cerebrospinal fluid, assessment of plasma AADC activity, and/or DNA sequence analysis is required.[6] Blood testing and cerebrospinal fluid analysis will show very low levels of specific chemicals (e.g., 5-hydroxyindoleacetic acid) related to the production of the neurotransmitters dopamine and serotonin. Blood tests can measure the activity of the enzyme that is encoded by the DDC gene. Genetic testing for DDC mutations will confirm the diagnosis.[2]

Unfortunately, AADC deficiency is not yet curable and there is no effective treatment. Best practice involves raising the patient’s levels of the deficient neurotransmitters, in the hope that it will mitigate the child’s signs and symptoms.[5] In some patients, combinations of medications can help alleviate individual symptoms, but no one strategy works well for all patients. To an extent, the success of these efforts depend on the body’s ability to produce naturally functioning AADC enzyme.[5]

According to current consensus-based treatment guidelines,[5] the medication classes (alone or in combination) are listed in the Table below. Each medication is associated with significant side effects and/or drug interactions, and customization of treatment is important. Also, all of these treatments are off-label use for AADC deficiency and proper clinical trials are still need to determine if these threapies are effective.

According to the Pediatric Neurotransmitter Disease Association, there is evidence of effectiveness of physical, occupational, and speech therapy for patients with AADC deficiency.[11]

Table. Medications that may be effective in treating a patient with AADC deficiency[5]

There is little information based on long-term follow-up of patients with AADC deficiency. One review reports that the autonomic symptoms of the disorder can be life threatening, and problems like joint contracture could become apparent because of long-term musculoskeletal issues.[2]

The consensus guideline recommends vigilance against cardiac complications, such as arrhythmia, based on the autonomic symptoms of AADC deficiency.[5] In addition, impaired feeding and swallowing could raise the risk of infections (including pneumonia) in these patients.[5]

As an autosomal genetic disorder, gene therapy would seem to be a reasonable approach. In fact, early attempts at gene therapy have been conducted with Asian patients, utilizing adenovirus vectors to introduce normal DDC genes into the body. This treatment, called AGIL-AADC or PTC-AADC, resulted in improved body weight gain, less dyskinesia, and lower frequency of oculogyric crises 12 months after injection, based on two open-label studies.[12] None of the 18 patients (21 mo to 8.5 yr) had full head control or could sit unassisted or stand at baseline. All patients achieved clinically meaningful, sustained improvements (up to 5 yr for some patients) in motor, cognitive, and language milestones. The researchers reported that no new safety signals were demonstrated.[12,13]

According to the drug maker, PTC Therapeutics, an application for approval for AGIL-AADC could be filed with the Food and Drug Administration in 2020.[14]

Please visit Clinicaltrials.gov to research clinical trials currently underway. This link addresses trials in AADC deficiency that may be recruiting or in progress.

National Organization for Rare Disorders (NORD)
Provides a unified voice for the 30 million people who wake up every day to fight the battle with a rare disease, including parents and caregivers.

This AADC Deficiency Learning Page is supported by PTC Therapeutics. This page was developed by CheckRare, and the supporter did not influence the final article or editorial themes of this content. 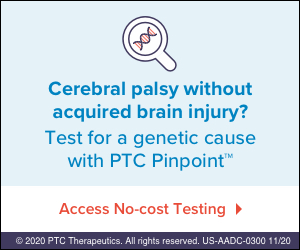